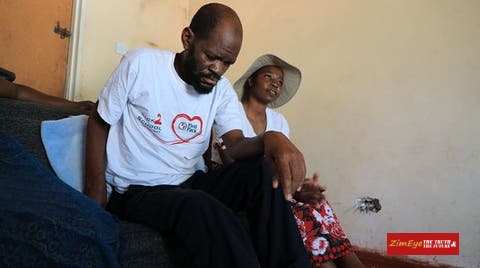 Veteran comedian Lazarus Boora, known by his legion of fans as Gringo, has fallen sick again after failing to raise money for medication.

Gringo, who turned 47 last month, is battling tesnel or intestine obstruction and experiencing discomfort in sitting, backache coupled by hearing and talking difficulties.

The actor last year had appendix surgery before he relocated to his rural home in Rusape. Now, he has returned to Harare where he is staying with his wife Netsai Meki and three children.

When The Herald Arts visited Gringo in Hatfield, Harare, yesterday, he was lying in agony and looking frail.

Sadly, unlike his former self, Gringo failed to crack jokes which he normally does effortlessly whenever he meets the Press or new people.

His wife and two nieces, Eridha Boora and Rhoda Ganga, had to help him onto the couch. The nieces, who both hail from Chimanimani, came after they were called on Saturday that the veteran actor was now seriously ill.

Barely after five minutes, Gringo, who was clad in white T-shirt and navy blue cargo pants, could not sit up straight and requested to lie down.

“Let me lie down, then I will wake up”, he softly said.

His wife put a pillow behind his back, saying that is now his routine.

“That is how he is surviving now, sleeping and sitting for a few minutes. He is in pain compared to before. On Saturday we took him to a hospital in Waterfalls because his condition was worsening. They said he was dehydrated. He is failing to eat properly, and if he eats, he vomits and is suffering from diarrhoea. We give him only a few spoons of porridge and he eats amorsel of sadza, which he sometimes can’t finish. Now he is having back problems. The doctor said he might have an infection in his intestines and needs to go for a scan. The challenge now is finances to go back to his first surgeon,” narrated his wife.

She said the situation was getting worse by day and appealed to well-wishers for donations so that he can be attended to by the surgeon. “The same Saturday his medical bill was high and we even failed to do blood tests and buy prescribed medication. His son, Taurai, bought the other pills. My sister from Msasa Park is the one who sometimes helps us with the medical bills. We have friends from church (Johanne Masowe Apostolic) who are also supportive, but this time around because of the lockdown they are failing. I can’t tell how much we need right now because we can’t even go the surgeon to get the quotation because we don’t have the money for consultation,” she said.

Asked why they came back from Rusape, Netsai said she brought her husband to Harare on July 19 after his condition deteriorated.

“I work at the Tobacco Auction Floors and that is how we are surviving. I brought him to Harare so that I could take care of him and at the same time there are several hospitals and clinics here. He has been unwell for a long time. Surprisingly his condition varies. There was a time he appeared to be fit so much that he could even drive to Mbare or take a walk to the shops, but the next day he couldn’t even move. During the Heroes holidays, his condition worsened. We are still waiting to go back to the doctor for scans,” she said.

The family is renting a room in Hatfield and the wife said life was hard for them.

She said Gringo still dreams of going back to acting, despite his condition.

“He believes he is strong to star in any production, but it has to consider his condition. Even if they give him a script while he is lying down, he doesn’t mind,” said Netsai.

Appendix rupture is a life-threatening condition which requires immediate surgery to remove and clean the abdominal cavity.

Open the link below to watch the video: