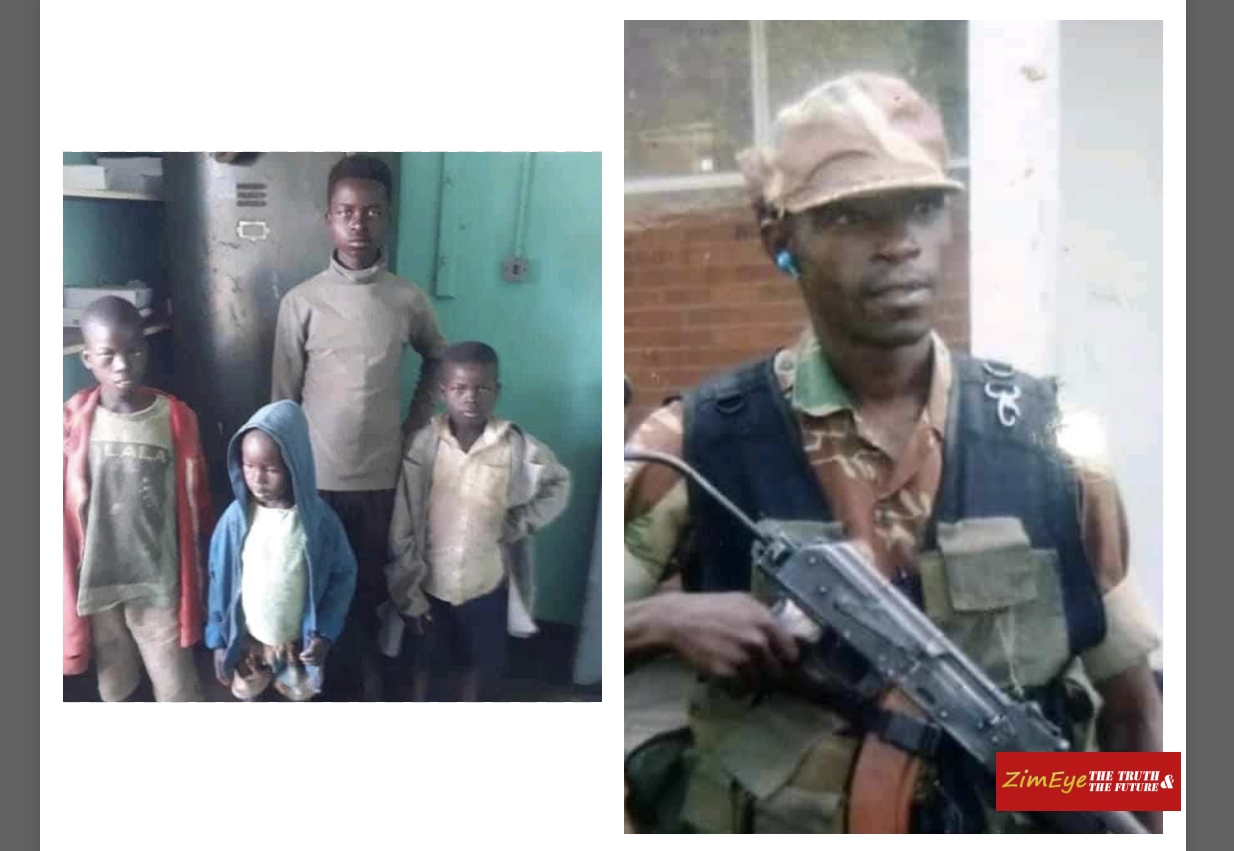 Four kids, with the older one 15 years old, will be appearing in court for killing a soldier who attacked their mother accusing thier father of burning his mother’s thatched house. The incident happened in Zaka yesterday.

ACCUSED (1) TAPIWA MUNEKWA NR NOT REGISTERED AGED 15 YEARS, OF VILLAGE
MUSENYI, CHIEF NDANGA, ZAKA
(2) NOAH MUSENYI NR NOT REGISTERED AGED 12 YEARS OF VILLAGE MUSENYI,
CHIEF NDANGA, ZAKA
3) TINASHE MUNEKWA NR NOT REGISTERED, AGED 10 YEARS, OF VILLAGE
MUSENYI, NDANGA,  ZAKA
This memo serves to put on record circumstances surrounding the death of Aaron Bhasvopayi.
BACKGROUND
The now deceased was a member of the ZNA and is not related to the accused persons. The now deceased  had received information to the effect that his parents kitchen hut which was recently thatched was burnt down by the alleged thatcher who had failed to recover the outstanding payment balance.The deceased travelled from Harare and went straight to the accused person’s homestead during the night and broke into the bedroom belonging to Patience Chineka NR 83-141768 L 83 of village Musenyi, Chief Ndanga, Zaka accusing her husband who was now in Police custody for setting fire to his mother’s hut.
CIRCUMSTANCES.
On the 21st day of October 2020 the now deceased left work and proceeded village Musenyi Chief Ndanga, Zaka after he got information that the accused person’s father had burnt her mother’s hut. He arrived at the accused persons homestead at around 2200 hours and smashed open the Patience Chineka’s bedroom door. He entered and found the accused persons already asleep. He woke them up by sprinkling Chibuku beer on them. After that he went to the next room, where he found Patience Chineka asleep and started to assault her accusing the family for the MDP committed by her husband.  Patience Chineka responded stating that his husband had been arrested in connection with the case but he confronted her and started assaulting her with booted feet and a knife which he used to stab Patience Chineka. She cried out for help and the accused person 1 realizing that his mother was being attacked grabbed the now deceased from the back ordering the other two accused to assault him with pieces of wood.. They took an axe which was in the room and attacked the now deceased hitting him several times on the head. The now deceased started to lose strength and later collapsed as he was having a severe nose bleed and blood gushing from his forehead.
When the accused persons noticed that the now deceased was unconscious they left him. They then alerted neighbours and accused person 1 came to ZRP Zaka to report that they had killed the now deceased in a bid to rescue their mother.
Investigations
Scene was attended by both ZRP DUB and CID Zaka and body was lying in Patience Chineka’s bedroom facing up in a pool of blood.
Observed on the deceased’s body were deep cuts on the fore head and chin
The body of the now deceased was searched and a ZNA identity card, 3 blue tablets , cigarretes, loose dagga wrapped in a rizzler paper and 2 satchets of dagga were recovered from his pockets
Axes and logs used to commit the offence were recovered at the homestead.
The body of the now deceased was conveyed to Masvingo General Hospital for post mortem.
Patience Chineka was taken to Ndanga District Hospital to seek medical attention but was in a stable condition though she was unable to woke up by her-self.
Post mortem conducted revealed that death was caused by Hemorrhagic shock
ZRP Zaka CR117/10/20 refers. Case is a straight forward one and is being investigated by DUB Zaka.