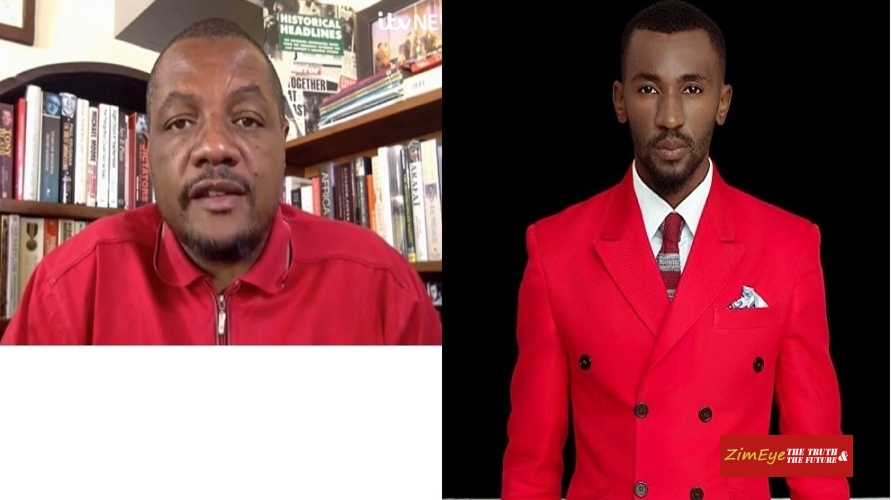 Journalist Hopewell Chin'ono posted on his social media accounts a post comparing a young activist named Namatai Kwekweza and Prophet Passion Java, Hopewell had a caption which basically said the youth of today had lost focus and were paying attention to things that are not important, Hopewell feels the young should follow people like Namatai who are trying to make change and not prophet passion java who he called a comedian . See his post  below.

Now this defines the bankruptcy of today’s youths! On the left (up) is an activist fighting for a better future for these youths, on the right (down) is a comedian “prophet.”

The numbers of followers define the uselessness of today’s youths and their lack of political consciousness. Tragic They will buy data to share Java’s nonsense and not share things that will enhance their future!

Award-winning documentary filmmaker Hopewell Chin’ono has never been one to hold back his opinion.

Even as a young journalism student in the early 1990s, he was not afraid to speak out and demand accountability.

He sort of kept a record of when a lecturer missed class,” recalls former classmate Njabulo Ncube. “He would say, ‘We came here to learn and lecturers missing classes cannot be tolerated’. At one time, he took the matter to the principal of the college.”

Some 30 years later, the independent journalist and anti-corruption campaigner remains as forthright, a symbol of defiance for many in a country where few dare to protest.

‘Will not be cowed’
On Monday, Chin’ono will appear in court for allegedly inciting public violence following his endorsement of planned anti-government protests in late July.
“ZANU-PF has noted with concern the systematic well-choreographed and sponsored attacks on the integrity of the first family by unscrupulous characters such as Hopewell Chin’ono this time targeting the president’s son,” spokesman Patrick Chinamasa said at a news conference on July 4. “We are aware that these baseless attacks did not start today but need to stop forthwith.”

It was a chilling warning, prompting Chin’ono to say on Twitter that his “life is now in danger” but also to declare that he “will not be cowed to fear”.On July 20, less than two weeks before the opposition-organised protests, police smashed a glass door as they raided Chin’ono’s Harare home and took him away, charging him with “incitement to participate in a gathering with intent to promote public violence, breaches of peace or bigotry”.
He spent 45 days in prison. Upon his release in September on bail, he shed light on the poor state of the penal system and prisons in the country, which he likened to “concentration camps”. Two weeks ago, he was arrested again and charged with contempt of court but prosecutors later dropped the charges. He has since been charged again with attempting to “defeat the course of justice” following his criticism of the country’s National Prosecuting Authority in the case of a gold smuggler with political connections.

“It’s all designed to intimidate journalists,” Chin’ono, who denies all charges, told Al Jazeera. “I am not intimidated. If they do this to me, other journalists will think twice about reporting corruption.”

“In 1980 [when Zimbabwe attained independence from Britain], I was 9 years old. Today, I am 49, [and] the same people who told me that I was the future are saying they will be with us until 2030 as they continue to loot everyone’s future,” he wrote on Facebook recently. “I won’t allow my children’s future to be stolen as mine was through corruption, looting and plunder. No.” A brilliant journalist’
Born in Harare on March 26, 1971, Chin’ono entered journalism somewhat circumstantially, he confesses.

At the age of 18, he was commissioned by Prize Beat Magazine to profile Jamaican reggae star Dennis Brown, who in 1989 toured Zimbabwe. Clad in a school uniform, he showed up for an interview with Brown at his Holiday Inn suite in the capital, Harare.

“I spent hours with Dennis and his wife talking about reggae, smoking and drinking,” Chin’one recalls. “It became a big party.”

From those early days onwards, his future career was sort of cut out for him. He enrolled at the Zimbabwe Institute of Mass Communication, where he excelled. “He is a brilliant journalist,” says Ncube, the current coordinator of the Zimbabwe National Editors Forum. “In college, he was on top of the class and well-liked.”

After graduating in 1993, he left Zimbabwe to advance his studies in the United Kingdom, where he later worked for broadcasters such as BBC and ITV.

He eventually settled back in Zimbabwe in 2007, but the state of his country under then-President Robert Mugabe left him dismayed.

“The economy was totally changed. Prices were unbelievably high and shops were empty,” he says. “The state had collapsed and corruption was institutionalised.”

Chin’ono’s latest troubles began in June after he used social media to expose allegedly corrupt coronavirus-related contracts for the $60m acquisition of protective equipment for healthcare workers. Along with top government officials, Chin’ono and other journalists also linked the son of President Emmerson Mnangagwa to the scandal – allegations denied by both Collins Mnangagwa and the Zimbabwe African National Union-Patriotic Front (ZANU-PF), the party that has ruled Zimbabwe since independence in 1980.