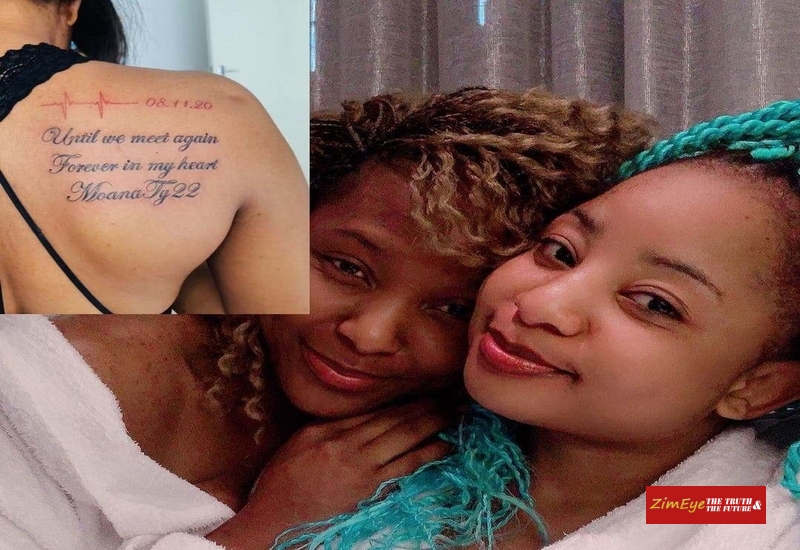 Moana sister Tatts get a tattoo in honour of her late sister: Pics. Firstly before we go to the main story we want you to know the background information about these two sisters. Who is tatts? Tatenda Amuli mostly well known by the name “Tatts” mother of two da”Kayla”. Tatts is a sister to the late Mitchell Amuli. She is an influencer and a social media socialite.

Here is a list of things that she do in real life. Actress, Songstress FanPage, promoter fitness fanatic, Music Video Promoter, Model, Makeup Tutor, Photogenic she also do Marketing and advertising for companies. WHO WAS MOANA?  Moana real name “Mitchell Amuli” was born in 1994. Moana was a Zimbabwean socialite, actress, fitness trainer and brand influencer. She was a brand ambassador to nashpaints and official push athletics.

Mitchell was a daughter to Ishmael Amuli, and also a Muslim descent since her father is a Muslim.

Due to her ability in acting, she managed to feature in various famous videos (Jah Prayzah _Munyaradzi) (Freeman_Muridzo) among others. Because of various endorsements from the big artist in the industry, she managed to acquire a huge following especially on Instagram she became a model to many.

Moana died in a car accident on 8th of November 2020 when she was coming from her birthday celebration at Ginimbi night club “Dreams nightlife club” which was formerly known as “club sankayi”. The accident also claimed Ginimbi life together with other two friends.

Looking at the background of this story from how events unfold its clear tatts had a big heartbreak as it happens after she lost her boyfriend Scara the drummer. Since the death of her sister Moana. Tatts has never been real OK, whenever she had a time to post something on social media she wouldn’t forget to mention or talk something about her sister.

This time around tatts came to show the whole world how heartbroken she is through the tattoo that she placed at her back to fully express how she felt due to the death of her sister who she was so close to. She revealed this tattoo as she was celebrating her birthday recently.

Many people use different ways of expressing themselves, some post on social media, some cry privately, some even do the worst things. But on this one Tatts decided to tattoo a message for her late sister to show the world what she is feeling. Check tatts tattoo and her back which she placed in the memory of her sister. The tattoo reads “08.11.20.

Until we meet again, forever in my heart Moana ty22″ This might look like a simple tattoo but it carries with it a deep and sad message. Firstly the graph shows someone breathing pattern, in hospitals if someone breathing pattern went flat like that is shows that he /she is longer breathing, which is a sign of death. The date on the tattoe shows the date that Mitchell Amuli “Moana” Died and stopped breathing. This followed by a message she had for her late sister.