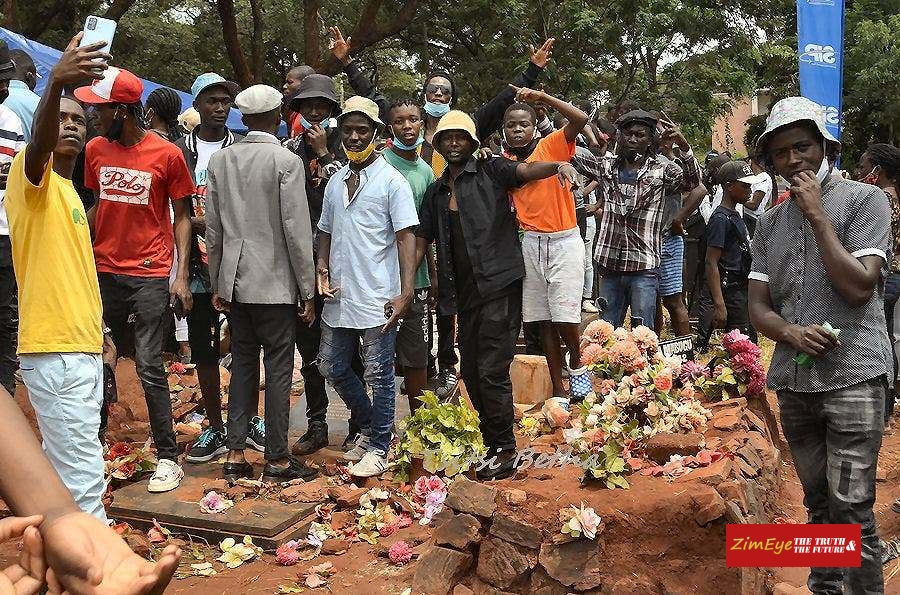 Mourners who attended Soul Jah Love’s burial on Saturday at Warren Hills cemetery left behind a huge trail of destruction that many have described as ‘disgraceful’.

In the African culture, the desecration of graves or cemeteries is viewed to be a taboo of the highest order. Those that desecrate graves might find themselves at the mercy of avenging spirits. While the law states that it is an offense to vandalize or destroy graves.

Soul Jah Love’s legions of fans who attended his burial on Saturday did not have any respect whatsoever for the dead as they wilfully destroyed tombstones, graves, and other property in the cemetery.

Youths who defied the Covid-19 regulations could be seen standing on top of tombstones as they tried to get a better view of the proceedings.

The human traffic was just too much to handle for the Zimbabwe Republic Police as they failed to control the mourners and to enforce lockdown regulations.

Soul Muzavazi Musaka’s, burial was also attended by his colleagues in the music and arts industry, government officials, relatives, and officers from the Zimbabwe National Army who were in charge of the proceedings.

Chibaba, as he was popularly known, died of diabetes-related complications on Tuesday evening last week at Mbuya Dorcas Hospital in Harare. He was 31.

He joined other musicians such as Simon Chimbetu, Chinx Chingaira, and Oliver Mtukudzi who were conferred with the Hero’s status.

However, Simon Chimbetu and Chinx Chingaira were declared liberations war heroes mostly for the role they played in the country’s liberation war.

While Oliver Mutukudzi was declared National Hero for the role he played in the music industry.