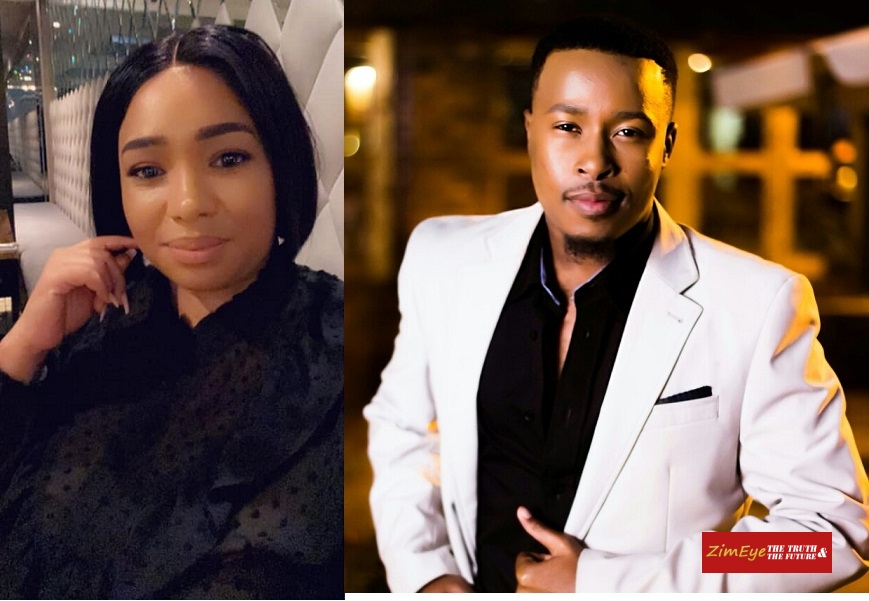 Olinda Chapel and Tytan have been back together since October but the two lovers are trying their best to keep their romance out of social media. Olinda and Tytan broke up and got divorced after Tytan accused Olinda of domestic abuse.After a year of being apart the lovers have united and are happy in love. Olinda has been posting hints of the couple  and today she posted a photo of the couple having cocktails and in the photo she shared part of Tytans arm and body. See the photo below.

UNITED Kingdom based socialite, Olinda Chapel and musician, Tytan seem to have rekindled their relationship after a messy split.

The two went through a scandalous divorce in August last year just after celebrating their first wedding anniversary.

At the time of the divorce that set tongues wagging, they had a heated exchange of words with Tytan real name Njabulo Nkomo accusing Olinda of abusing him and not disclosing her HIV status during their relationship.

Being no stranger to airing her dirty laundry on social media, Olinda hit back with a live video claiming her former husband was a serial adulterer who had used her as a ‘meal ticket’. Her fans had gone as far as drawing up a petition with over a thousand signatures to have the ‘Mukoko’ hit maker, Tytan deported from the UK.

However, all this seems forgotten now as Olinda who had taken a sabbatical from social media returned with the Instagram username ‘@olindachapelnkomo’ and a post of her and Tytan’s daughter, Nandi with the caption ‘mummyanddaddysgirl’.

A few months back Tytan was part of a line-up at the Chabvondoka UK show hosted by Olinda.

In the comments, fans of the duo speculated whether or not they were back together, with one saying, “May the good Lord bless your reunion.”

Another poked fun at the reconciliation, “Olinda and Tytan getting back together after a messy breakup is the reason why I’ll always mind my own.”

“Tytan and Olinda are back together? I wish I was as forgiving as both of them because wow,” wrote another.

The ‘couple’ has, however, stayed mum on the issue, leaving fans to only to speculate.

Olinda Chapel has been the centre of Internet drama for quite some time. She doesn't care who she targets and she doesn't hold back her words. She has had many running battles with Stunner and that particular episode of drama seems to not have an end in sight.

Olinda had also had a war of words with Tytan, her potentially her ex-husband. That situation might be reversed if the changes to her social media handle are anything to go by. Fans were sent into a hive of speculation wondering if Olinda and Tytan were back together again. This came after Olinda changed her Facebook and Instagram names from Olinda Chapel to Olinda Chapel Nkomo and the Nkomo name she added is the surname of Tytan.

Earlier this year Olinda approached the High Court seeking to formally end her then 19-month marriage to Tytan arguing that her husband never loved her but married her to facilitate his stay in the United Kingdom, where she has permanent residency. The drama between the two then took off from there. Accusations of abuse were flung all around and accusations that one gave the other HIV.

In an exclusive interview earlier this year Tytan spoke on how on at least eight occasions Olinda had locked him out of their house and repeatedly threatened to get him deported back to Zimbabwe. While Olinda was pregnant with their daughter he says he began noticing an unusual amount of medication being delivered. Tytan said he was in denial when he looked up the medication on Google and discovered it was for HIV.

“I thought maybe it’s a precaution, just to make sure the baby is safe,” Tytan said.

Afraid of triggering an argument with Olinda, he said he held back from asking her why she was keeping the medication.

He revealed: “It kept affecting me, so one day when she was in a happy mood I decided let me try and ask. I said to her ‘I have noticed now when you are going to the hospital there’s different medication you have been getting. How come it’s different now?’ I stalled myself, and finished by saying I know the truth now. I left the house to go to the studio.