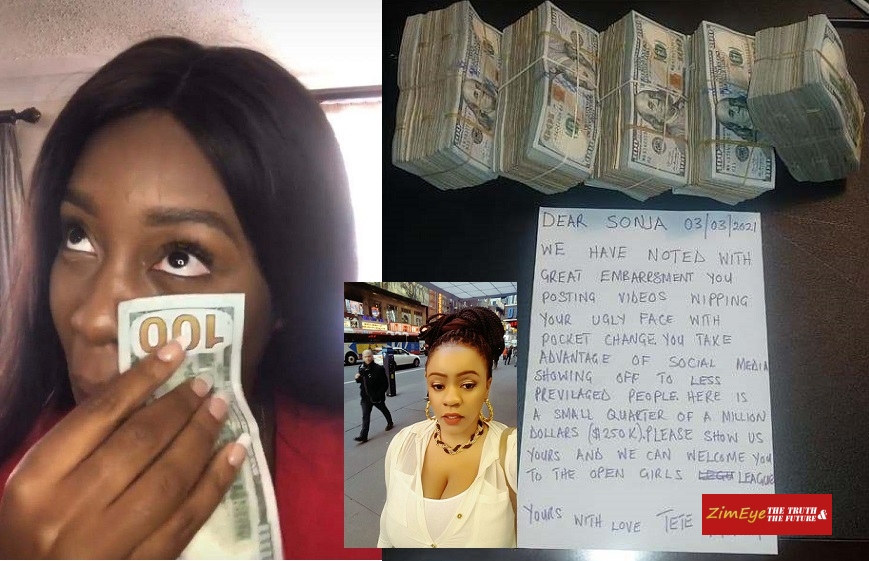 The war of words between Sir Wicknell’s sister Moreblessing  Madeline Chivayo and her brother’s wife Sonja Madzikanda is far from over as Madeline resumed with her tirade today.

Wicknell Chivayo’s sister struck back again as she responded to her brother’s wife’s rant  were she took to social media and posted a video of herself wiping her crocodile tears using US$100 dollar bills.

In response to Sonja’s rant, Madeline flaunted four bricks of hundred US dollar bills with a note addressed to Sonja. She bragged about how she has all the money she needs and how she has no need to ask Wicknell for money.  Madeline also went on to challenged her sister-in-law to do the same claiming that is the only way that she can be welcomed to the “Open Girls League.”
Posting on her IG stories, she claimed that she has only asked her brother for money on two occasions.  She revealed she only did that to provoke her as she knows that she hates it when he gives his family his money.

Social media users were in for a treat yesterday as Sir Wicknell’s sister Madeline came out guns blazing and blasted her sister-in-law Sonja.

Sonja still hasn’t directly responded to the barrage of attacks or allegations leveled against her. Instead, she welcomed the many followers who flooded her IG page.

Meanwhile, Sir Wicknell is still maintaining his silence as he still hasn’t addressed the whole drama that took place yesterday.