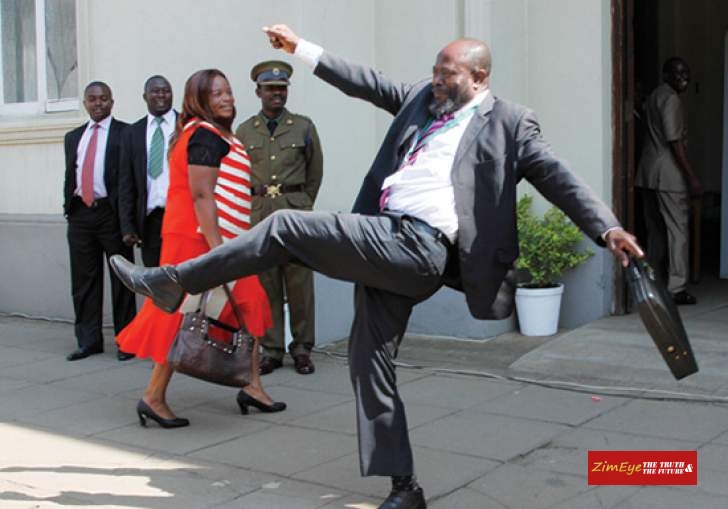 The wife to the man alleged to have been caught red-handed with  MP Joseph Chinotimba’s second wife pleaded for forgiveness.

Zimeyenews has established from a local publication zimeyenews that Mai Mahachi the wife to the man only identified as Mahachi, who cheated with Mp Chinotimba’s second wife has begged MP Chinotimba for forgiveness on behalf of her husband.

This comes after,  legislator Joseph Chinotimba caught his second wife red-handed with her lover at the Belvedere Vehicle Inspection Department (VID). Fiery Chinotimba went on to assault his wife lover after he allegedly caught Mahachi caressing and kissing Locardia.

Speaking at Milton Park Police station where the two couples had been taken for counseling. Mai Mahachi took it upon herself to apologize for her husband’s shenanigans.

She pleaded with the Zanu Pf Legislator to forgive his husband stating that, he did what he did probably because he had lost feelings for her. She said:

“I want to believe he did it in foolishness or he might have lost feelings for me leading him to salivate for someone’s wife as if I was not available.

“Probably I failed to sexually satisfy him.

“His reason to date a married woman might be because I no longer look attractive but he married me and went on to give vows before a minister of religion only to act different today because of Mai Chinotimba.”

On the other hand,  Chinotimba’s second wife Locardia Dzvitiro.  was unapologetic, as she claims that she was lonely.  She added that she cheated on him because Chinotimba was no longer able to perform to her satisfaction.

The unabashed Dzvitiro also went on to attack Mrs. Mahachi for failing to take care of her husband’s needs.

Meanwhile, Mp Chinotimba has since ordered Locardia to pack her belongings and leave their house in Belvedere.

ZANU-PF’s Buhera South Member of Parliament Joseph Chinotimba’s second wife is demanding a divorce token after she moved out of her matrimonial house on Tuesday.

Locardia Dzitiro wants MP Chinotimba to take her back to her parents according to the Shona custom.

“There is nothing like divorcing a wife at a police station,” said Dzitiro. “If he no longer loves me he must give me a token of divorce and leave me in the hands of my parents.

“He never caught me naked or having sex with that man the way he wants his relatives to believe.”

Dzitiro was reported to have been caught kissing and caressing a married man identified as Mahachi near VID in Belvedere on Tuesday.

A scuffle ensued and the matter ended at Milton Park Police Station where they received counselling.

“They interrogated me with the assistance of his sisters who never attended the funeral of our child only to appear at the police station to force me out of the house,” said Dzitiro.

Dzitiro said she hasn’t had a chance to get her belongings.

“They want to remove my property in my absence as if they caught me at a lodge,” said Dzitiro.

“We were in the company of two other men and the car was parked by the roadside but his sisters are spreading falsehoods.

Speaking at the police station on Tuesday after the scuffle, Dzitiro said Hon Chinotimba was neglecting her needs.

“VaChinotimba lost affection for me long ago and does not give me the attention I expect as a young woman; apa havabvire nekuda vana vadiki vavasingazokwanisa.

“I am his second wife with three children and we lost a child recently. He had taken that child for DNA saying the baby was not his.